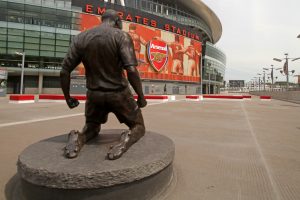 Those lucky enough to have a ticket to watch an Arsenal game or who are taking one of the popular stadium tours, can hardly fail to notice a statue outside the south-east corner of the Emirates of a footballer on his knees celebrating. It commemorates an Arsenal legend and the club’s all-time goal scorer, but this is not somebody from a distant era, barely remembered.

Thierry Henry is only 40 years old, and, although he has been retired form professional football for nearly four years, and last pulled on an Arsenal shirt six years ago, he is still a familiar figure to millions, whether it be through his role as a football pundit for Sky Sports, or as assistant manager to Roberto Martinez during Belgium’s World Cup career.

A World Cup winner with France in 1998, Henry played for two of the biggest sides in the world in the form of Juventus and Barcelona, as well as enjoying a successful spell towards the twilight of his career with New York Red Bulls. Yet it was during his time with Arsenal that Henry wrote his name into the history books, scoring 226 goals from 369 games, and  helping the club win two Premier League titles and two FA Cups, as well as helping the team achieve  the unique feat of going through the whole of the 2003 – 2004 “Invincibles” season undefeated.

Yet when he arrived at Highbury in August 1999, after a disappointing spell in Italy, many expressed doubts about his ability to adapt to the quick and physical English game, criticism which seemed justified when he failed to score in his first eight games for the club.  But then, in September of that year, on as a substitute against Southampton, Henry picked the ball up on the edge of the area with his back to goal, and scored with a glorious shot that gave the Gunners three precious points on the road. History was about to be rewritten. 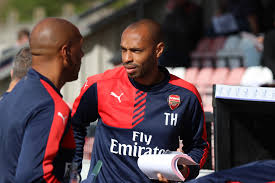 Not everything during his Arsenal career was an unsullied triumph for Henry. League titles were snatched away from Arsenal by Manchester United, and he was forced to miss their 2005 FA Cup victory over their bitterest rivals with an Achilles injury.

However, the biggest disappointment came in 2006 when Arsenal reached the European Cup Final against Barcelona in Paris, having disposed, along the way of Real Madrid, with Henry scored a brilliant solo winner in the Bernabeu. Forced to play for the majority of the match with 10 men after goalkeeper Jens Lehmann was sent off, Arsenal nonetheless led through a Sol Campbell header, and Henry had two one-on-one opportunities with the Barcelona keeper, the sort of chance he would normally score in his sleep, to effectively put the tie to bed. Instead he missed them both, and the Catalans came back to win with two late goals.

At the end of the following season Henry transferred to Barcelona for £20 million. Although he enjoyed a relatively successful career in Spain, winning the Champions League, La Liga twice and the Copa del Rey, towards the end of his stay there it was clear that his best days were behind him and he was allowed to leave for New York in July 2010.

Return of the King

In January 2012, during the MLS off-season, Henry returned to Arsenal for a two month loan spell to provide cover for players who were absent at The African Cup of Nations. He made his second Arsenal debut as a substitute in a third-round FA Cup tie against Leeds United, and made an immediate impact, collecting a pass from Alex Song to score the winner, sparking a huge emotional reaction from the player, his manager and the packed stadium. He also scored on his last game on loan, a stoppage time winner away at Sunderland.

Henry enjoyed a very successful international career with France, winning 123 caps, and scoring 51 goals, which is a record, and ten more than the nearest contender Michel Platini. He was part of the squad that won the 1998 World Cup on home soil, although he did not feature in the final, and was an integral part of the team that followed that up with triumph in the European Championships, earning a man of the match award for his performance in the final against Italy.

Despite these statistics, there remains a feeling that Henry never managed to reproduce his club form when wearing the blue jersey of France, and, as a result, he is less revered in his native country than he is in London N5.

His reputation has also been sullied, certainly in Ireland, by the “Hand of Thierry Henry” incident which occurred in 2010 during a World Cup qualifying play-off clash. Drawn against the Republic of Ireland, the two teams were level on aggregate going into extra time in the second leg in Paris, with only seven minutes separating them from a penalty shoot-out to decide who would go to the World Cup finals in South Africa. That was when a free-kick found Henry running towards the back post where he deliberately controlled the ball with his hand twice before playing it across to William Gallas to score into an empty net.

The referee missed the incident and the goal stood, much to the fury of the Irish players, officials and supporters. Protests to FIFA followed and calls for the match to be replayed which, in the end, amounted to nothing. His renaissance owed much to his manager at Arsenal, Arsene Wenger, who converted Henry from a winger to a striker, giving him more responsibility as the spearhead of the attack, and the Frenchman never looked back. With a deceptively causal approach which saw him glide past opposing opponents, often with a devastating turn of pace, Henry was almost the complete player, able not only to finish moves, but also initiate them as well. He could score almost any type of goal, from long-range thunderbolts, to his trademark finish where he would open his body on the left-hand side and slide the ball past the keeper. He rarely scored with his head – but that was not his game. And he was not just a goal scorer either – his Premier League record with Arsenal included 74 assists for other players.

“And then there is the magnificent Thierry Henry – someone who has blistering pace and is unbelievable when he is finishing at his best.

“I think he’s the best player to have played in this country. I’d go that far. “

“He was one of the greatest players this club has ever had and has done a huge service to this club. “

“The word great is overused, but in Thierry’s case it is absolutely true.”

“There’s a difference between skills and functional skills. Thierry’s skills were perfectly functional. There was something behind every movement: to get a strike, receive a pass.

“I asked my son who the best player in England is. I was waiting for him to say his dad. He said Thierry Henry.”

“The first seven games when he first came to Arsenal, we were looking at the situation thinking we can’t win the league with Thierry Henry. Then he scored his first goal at Southampton and after that he was amazing. To get 235 goals…I didn’t think Ian Wright’s record would be broken.”

“The only way to stop Thierry Henry?” With a gun!”

“What a great player Thierry Henry was – I’d say he’s the best to ever play in the Premiership, just ahead of Shearer.”

“I just want to thank him for the great moments he gave to all of us.

“What happened to Thierry Henry was that he wanted to be the best player every single day of his life. In training, the FA Cup, Premier League, League Cup and the Champions League.

“He had incredible power and pace, will-to-win and ­determination. He could run at defenders and score incredible goals. He would lift the rest of the team.”

“The first day that he came into the dressing room, I did not dare to look him in the face. I knew everything that he had done in England.”

“He was one of the best players to ever play in the Premier League. He was on the level of George Best or Eric Cantona,”

“When he scored his first Arsenal goal — at Southampton — I ran over to him and told him how glad I was that I could tell my kids that I was playing the day Thierry Henry scored his first goal. He said I was crazy afterwards, but I had seen a special player and I made sure he knew that. “

“With Thierry Henry so many asked for his shirt that the club threatened to start making him pay for ones he gave away!”

“On his day he was absolutely scintillating, a supreme athlete and a magnificent footballer. What amazed me was that he never seemed to get a sweat on. He could run 100 meters past five players and he wouldn’t even be breathing heavily.”

“I tell my kids in the Academy at Newcastle to watch Henry. He plays with such a swagger, not an arrogance, and that is a great quality. He always looks so comfortable. You talk about cars going from 0 to 60 in a matter of seconds, and he is like that. He just explodes. I could sit there for hours and watch him.”

“I think he’s definitely a legend with Arsenal, there’s no question about that. His time there was fantastic and he’s always been a good role model in how he holds himself, as a footballer and a human being. He’s never wavered from that type of professionalism that you need to achieve that status.”

“Ronaldinho is a special player, but Thierry Henry is probably technically the most gifted footballer ever to play the beautiful game”

“I always think about what I missed, and I think that was my driving force – never be satisfied with what I’ve done.”

“My dad always taught me to never be satisfied, to want more and know that what is done is done.”

In football you always get judged on your last game. Whoever you are, or how amazing you are, it’s the last game that everyone has seen.”

“You can never have enough trophies. If there were ten to be won a year, I’d want to win them all! That’s not being greedy, it’s just a natural thing.”

It took me a while to understand what that club [Arsenal] meant. That why sometimes I got so mad, because I was so in to it. I became a fan. I actually became a fan.”

“But, at the moment, when I step on the pitch, when I have the ball I know it’s mine. It’s just a feeling.”

It’s not about me, it’s about how I can help my team to achieve more. And I do that through scoring goals.”

“I’m obsessed by the idea of making my mark on history. And Arsenal is my paradise.”