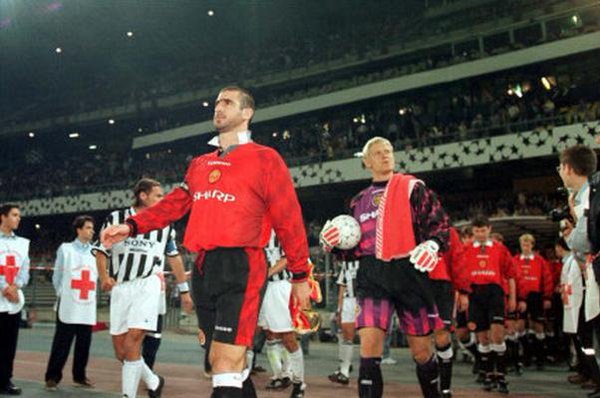 “If ever there was one player, anywhere in the world, that was made for Manchester United, it was Cantona. He swaggered in, stuck his chest out, raised his head and surveyed everything as though he were asking: ‘I’m Cantona. How big are you? Are you big enough for me? But I do admit that there was something, perhaps a mental block, that stopped him from being the best player in the world. There was an element in his nature that seemed to prevent him from realising the full potential of his incredible gifts.”

“When I was kid I was crazy fan of Eric Cantona’s. I imitated him all the time, he was like an alien. I still love Manchester United, I dream to play there one day.

– Michael Essien’s quote about Cantona while he was at Bastia

“He had a massive influence on my career as a young player coming into the team. We struck up a good relationship and he ruled Old Trafford for five years. He was an unbelievable talent to play with and watch in games and training. Eric Cantona brought an extra dimension. Plenty of things he tried didn’t come off, but you remember the ones that did — the flicks, the outrageous lobs. He made things look easy that weren’t easy at all. Before him, we struggled to score as a team, but as soon as he arrived the goals flowed.”

— Ryan Giggs on how Cantona helped him when he was young.

“I think he’s right up there with the very best players who have played for Manchester United. He had this presence and he could do things extra special when it was needed in those big games – that’s why he did so well.

“I always really enjoyed Eric’s company. Eric was the ultimate pro, the first on the training pitch to do his own warm-up and he’d be the last into the dressing room for a shower. But when we were having our bonding days, he’d always be the one to be dressed first when the lads were still coming off the training pitch. He’d ask: ‘Bryan, where are we going today?’ and I’d say: ‘I’ll tell you when I come out of the shower’. He just loved those days, whenever we did them every couple of months. I can always remember fondly the first few times when he was asking where we were going and I said I had to keep it a surprise!”

“(He gets in my all-time Manchester United side) not only because of that extraordinary ability but because he was an absolute inspiration to every young player who came into the team.”

“He changed the mentality and changed the way of everything. All the kids we’ve seen grow up with Manchester United from that period, they’ve really benefited from that and you could go and speak to David Beckham, Gary Neville and Paul Scholes about him. They will always point to him as he was the guy. In my eyes, he was responsible for the Premier League developing as quickly as it did. Everyone took to him, controversy or not. He oozed charisma and genius in equal measure, and is by far and away the best ever in the Premier League. It was an honour to have played with him.”

“I would have loved to play with Cantona, too; he had something that was inspiring.”

“Collar up, back straight, chest stuck out, he glided into the arena as if he owned the f***ing place. Any arena, but nowhere more effectively than Old Trafford. This was his stage. He loved it, the crowd loved him.”

“He was the only player I saw who the manager never had a go at. We all went to a film premiere and were told to wear black ties. Eric turned up in a cream lemon suit with Nike trainers. The manager told him that he looked fantastic!”

“I appreciate ‘Canto’ a lot, I have always been 150 per cent behind him whether what he did was right or wrong.”

“I had the pleasure of playing with him for a year, and he was the perfect partner for me when I came to United. He could score, he could pass, he could see a pass that no one else did, he had the charisma. Eric was just unbelievable.”

“When Cantona did come to United I knew that we’d win the title because he just had the aura and presence about him. He took the responsibility away from all of us lot. He was unbelievable, he’d come in at half past nine every morning, do his own warm-up and work on his skills, touch and his x, y and z. He was just brilliant. His goals and importance to the team make him an unbelievable player.”

— Paul Ince, the self proclaimed Guv’nor on Cantona

“I really appreciated that fire Eric had, it was part of what made him. You have to have that, in my opinion anyway. If you look at the great players of Manchester United a lot of the time you have that desire to be a winner, and sometimes that manifests itself with an uncompromising determination.

“Once he got to United, everything changed. It was as if he’d found the place he belonged and the stage he thought he deserved. It was Cantona’s arrival that was the key to United winning the league in 1993. Eric Cantona was special, he had an aura about him, he is the king of Old Trafford and that’s the way he should always be remembered. Eric is a great guy, a great player, one of the best players I have ever played with.”

“It was him who opened the doors in England to the French, in his time at United. Cantona was one of the best French players of all time. I’d give all the champagne I’ve ever drunk to be playing alongside him in a big European match at Old Trafford.”

“Eric was a fantastic penalty taker because he used to place the ball and I don’t know how many times he sent the keeper the wrong way, but he seemed to have the art, confidence and wit to wait until the last minute and make that decision, when you can go one way,

“What hasn’t already been said about Eric Cantona? A sublime player, and the guy who opened the door for so many other Frenchmen in the English championship. A player with character – the King!”

“I got the ball just outside my own area and ran towards the halfway line as Eric ran back with me. I kicked it about ten yards in front of us, thinking I’d outpace him. As I did so, Cantona moved his arm across me and goes, ‘Stay where you are,’ then ran past me and got the ball.”

“He was a very exciting and entertaining player to watch.”

“I remember seeing Eric Cantona play for Manchester United. The way he used to control games was special to watch.

“Cantona had such a massive impact on United as a football club. I always remember an impudent chip against us (Southampton) at The Dell in front of the Milton Road end, before he stood there as if to say, “I am the king.” I loved his arrogance and if you’re that good, I think you can be arrogant and get away with it.”

“You always see the best players in the world and I always watched Eric Cantona, Zinedine Zidane and, while he was at Real Zaragoza, Gustavo Poyet. I liked Cantona’s character, he was a winner and always worked hard, he never lost one ball and was always thinking about the victory.

“It’s hard to say why he and United went together so well, but I think United is the biggest club in the world and he was maybe then the biggest character in the world game. I think of his charisma and the way he was and I think that’s what the English people, especially the United fans, liked very much. He was honest, a class player and a very talented player as well. Eric finished his career when he was very young but will always be a legend at this football club.”

“As a player, he [Cantona] was my favourite. Best players I ever played against were Cantona, Dennis Bergkamp and Gianfranco Zola. People would say about today’s game but there were no three players better than them.

“Cantona was my idol as a child”

“Eric was a fantastic player, a strange guy, his own man. I had a decent enough relationship with him. He rented my house for two years so my wife got friendly with his wife, but we never really socialised together. On the field, it was a really great partnership, I thought.

Roy Keane told a story about how good and kind-hearted Eric Cantona really was.

“In my early years at United, there was a players’ pool and each of us would get about £800 out of it at the end of the season for the work we’d done for the in-house magazines, the club videos. We were all on decent money and eight hundred quid wasn’t going to make or break us, so one time, we decided to put all the cheques into a hat and the last cheque out, whoever’s name was on it, got to keep all of the cheques.

“We all put our cheques in except a couple of the younger players – I think it was Becks and Gary and Phil (Neville).

“They opted out. They were new on the scene and didn’t have the money to spare, but Scholesy and Nicky Butt put their cheques in.

“I think I was the third last name out, so I got a run for my money, but the last cheque out – Eric Cantona. He’d won about sixteen grand.

“He came in the next day, there was plenty of banter – ‘Eric, you lucky b——!’ F—— money to money. But he had got somebody to cash the cheques, he’d split the money in two and he gave it to Paul Scholes and Nicky Butt because, he said, the two of them had the balls to go into it when they couldn’t really afford it. The two lads took home about eight grand each. I just thought, ‘what a gesture.’ Nobody else would have done it.”