David Beckham: “It was a dream to meet him because he was my dad’s favourite player and my middle name Robert is after Sir Bobby! 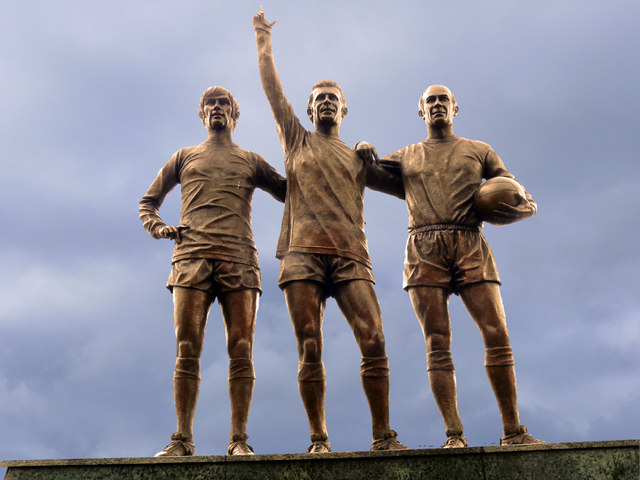 Manchester United named Old Trafford’s South Stand after one of their biggest legends on April 4, 2016. Sir Bobby Charlton is undoubtedly one of England’s greatest living football man. The veteran midfielder achieved almost everything during his playing career and is still active in the football world. He will be remembered in the same breath as the best players of all-time. Here’s a few quotes by his former colleagues and other renowned figures on the English gentleman:

“There has never been a more popular footballer. He was as near perfection as man and player as it is possible to be.”

“Bobby Charlton was known for his creativity. He was on the move for 90 minutes, and had the lungs of a horse.”

“I played with him briefly toward the end of his United career, and he was just gobsmacking to witness. He was 35 when I got to Old Trafford, and he was as fit and enthusiastic as a 25-year-old. He’d done so much, but his desire never faded – his work-rate kept him right at the top. He was still trying to improve.”

“The great attribute of Bobby – and it’s a great example to anybody who has been successful – is how he has kept his feet on the ground and retained his humility all his life.

“You can’t go anywhere in the world without talking about Manchester (United) and Sir Bobby Charlton, they just go hand in hand. They were just made for one another, and he certainly upholds everything that is good about Manchester United.”

“Charlton, as we all know, covered the whole pitch. Played on the left, on the right, in the middle. He never stopped running and he had a very powerful shot and scored a lot of great goals. I have many more good than bad memories from my career, but some of the bad memories come from when I crossed paths with Bobby Charlton. It was Bobby Charlton who spoiled my day in the World Cup semi-final of 1966 and later the European Cup final of ’68, but I’ve forgiven him and we are still good friends now. He’s a real English gentleman.”

“He was a beautiful player, and a lovely striker of the ball; 30 yarders into the roof of the net – I couldn’t even reach the goal from 18 yards! If he was in the center of the field and coming through, and if he was 30 yards from goal, I knew that he was going to have a shot. And I knew that if he got it on target, and the goalkeeper saved it, the chances of him holding it cleanly was very rare. Therefore, as soon as I saw him line up for a shot, I would be in on the goalkeeper. So I got a lot of my goals from Bobby, really.”

“What a pleasure to play alongside. I don’t think I’ve even seen anybody who could beat players as easily as him, myself included. I often used my pace, but Bobby made it look effortless. And once he got within 30 yards of goal, he was lethal with either foot. Because he played a lot on the left, many people assume he was a natural left-footer, but I don’t think he was. He was just so good with both feet.”

“He was a naturally gifted player, and was two-footed as well, one of the most two-footed players you’ve ever seen. He could go either side, shoot with either foot.”

“Sir Bobby represents everything that is good about the game of football; fair play, respect, and true loyalty and he is a good example for future generations, both on and off the pitch.”

“Bobby is, quite simply, the most iconic figure in English football history. A player, a diplomat, a gentleman and a tireless worker for charity, he represents everything that is good about football and Manchester United.”

“So his 49 goals for England and his 249 for United can’t all have been 25-yard thunderbolts – it just seems that way in the mind’s eye. When he hammered one into the top corner from long range it was as if he were a man possessed, desperate to separate the leather casing from the bladder.

“I made virtually all of my 57 England appearances alongside Bob and I can remember few greater competitors and few greater professionals. His fellow greats like Best and Moore did not lead blameless lives away from the game but Bob was dedicated to his craft.

“His sainted image made it difficult when you played against United though, because although I never heard him swear at a referee, Bob would moan at them constantly and they would be so in awe of the great man that they’d usually do as they were told.

“I can remember, more than once, yelling: “F***ing hell ref, why don’t you just give Bobby the whistle, you might as well!”

“But this is a man who survived the Munich air disaster in 1958, won the World Cup in 1966, the European Cup in 1968 and played a key role in the appointment of Alex Ferguson as Old Trafford manager in 1986.

“Sir Robert was fantastic, he could hit some ball for a goal,” he added. “30 yards out! I would never even think of it, I wouldn’t even reach the penalty area. Sir Robert had probably one of the strongest shots in the game at that particular time, with that ball and the boots.

“What a fantastic player, a wonderful player. What a crosser of the ball, when Bobby was on that left wing in particular, he knew where I would be; I wasn’t at the far post, mainly the near post. I would nip in, be lucky and score. So we knew each other’s game.”