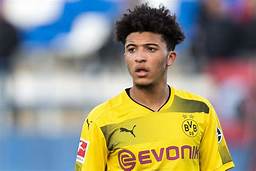 That is according to The BBC who report that the 18 year-old is now worth nearly £80 million, more than 800% what he was valued at in September, based on figures compiled by the CIES Football Observatory.

The former Manchester City player joined Borussia Dortmund for £10 million in August 2017, and has since gone on to make a lasting impression in the Bundesliga, particularly this season where he has scored 6 goals in 21 appearances for Dortmund, including the winner in the Ruhr derby on Saturday against bitter local rivals Schalke. He was named Bundesliga player of the month for October.

Meanwhile he has also broken into the England senior squad, making his debut in the Nations League away to Croatia, then featuring in the friendly win over the United States, and making an impact from the bench in the reverse fixture with Croatia.