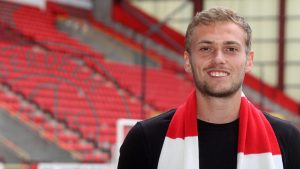 Manchester United’s much traveled-striker James Wilson has chosen to add Aberdeen to a list that includes Derby, Brighton and Sheffield United, after agreeing to move to Pittdorie for the rest of the season.

The 22-year old former England under-21 international was once tipped as a major star of the future with ex-United manager Louis van Gaal describing him as one of the “brightest young English prospects”, but injuries and the emergence of Marcus Rashford have seen his prospects at Old Trafford blighted.

Certainly there is a feeling that the latest loan move could either make or break his United career, with his current contract up at the end of the season, and the Old Trafford hierarchy will be hoping he can rediscover the form that saw him score 4 goals in 20 senior appearances for the senior side.

United are expected to pay the lion’s share of Wilson’s weekly wages of £30,000 whilst he is in Scotland.

Certainly Wilson appears pleased with his latest move, telling Aberdeen TV ““I chose Aberdeen because it is a massive club. Scottish football is also getting a lot of coverage, a lot of good coverage. I know a lot of the Aberdeen games are televised. All round I feel it is the right move for me. It is a new beginning for me really.

“A few of my loan moves have not worked out as well as I would have hoped so this one is very important. It is a big year for me. I am hoping to get as many minutes under my belt as I can and hopefully get goals to help the team push forward.”