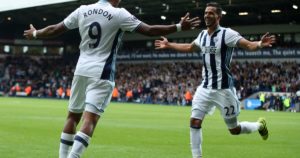 The Telegraph reports that Darren Moore is poised to become head coach of West Bromwich Albion on a permanent basis.

The 44-year old had never managed before he was appointed caretaker boss following the dismissal of Alan Pardew in April, with the club on the brink of relegation. Although Moore was unable to keep the team in the Premier League, he impressed during his brief spell in charge, winning three of his six games in charge, including high profile victories over Manchester United and Spurs, and drawing two of the others. He was also named manager of the month for April.

Now the club’s former defender is to be tasked with guiding the side back to the Premier League, a task that is set to be made harder by the likely depart of a number of star names at the Hawthorns, with the futures of Jonny Evans, Jay Rodriguez, Nacer Chadli, and Salomon Rondon all uncertain.