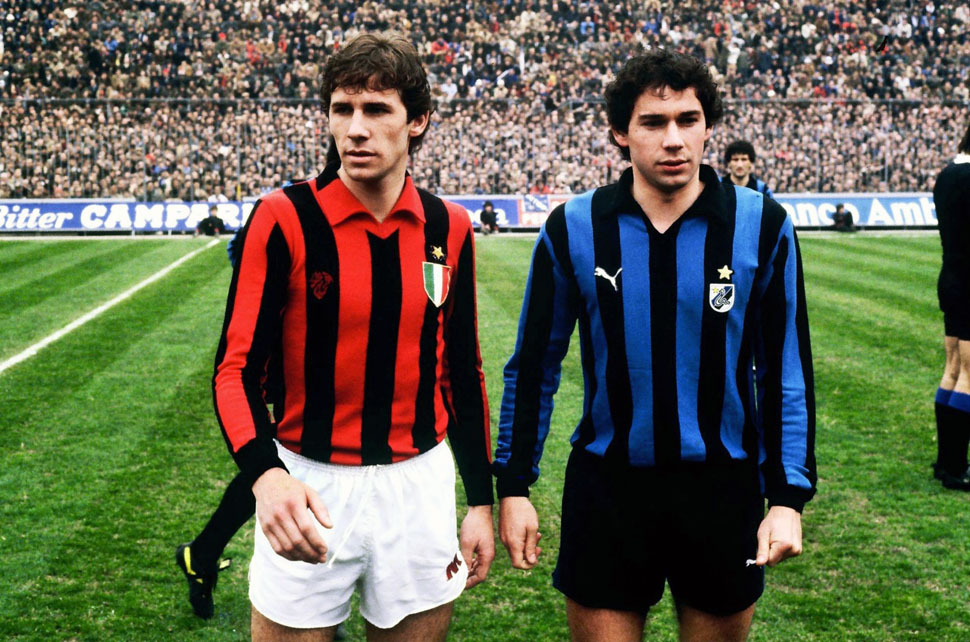 The English duo went on to win the 1966 World Cup at home. Bobby Charlton is regarded amongst the greatest players that England has produced and went on to enjoy a successful career at Old Trafford with Manchester United for whom he played in 758 games in all competitions and won numerous trophies.

Jack, who played as a central defender for Leeds United, made a total of 762 appearances for the Whites and won the league title in the 1968/69 season.

The two brothers, just like the Charltons, made their names at two rival clubs. Giuseppe, who plied his trade as a defensive midfielder or in central defence, went on to make close to 400 league appearances for Inter Milan and won two league titles.

Franco, on the other hand, is regarded as one of the greatest defenders to ever play the game. He stayed at AC Milan for the entirety of his career, and the San Siro outfit retired his shirt number 6 as a market of respect after the centre-back hanged his boots. Franco won six Scudettos and three European Cups at Milan.

Michael is considered amongst the most gifted playmakers to have played the game. During the course of his illustrious career, Michael played at some of the biggest European clubs, including Ajax Amsterdam, Barcelona, Real Madrid and Juventus. He won the league titles in the Netherlands, Spain and Italy and was part of the European Cup-winning Barcelona side in 1992.

Brian was part of the Denmark national team at the time of their greatest success: the 1992 European Championship. He also played for several European giants, including Bayern Munich, AC Milan, and Ajax.

The Dutch duo both turned out for Ajax, Barcelona and Rangers. Frank won five league titles with Ajax and the 1998/99 La Liga with Barcelona. He also won 112 caps for the Netherlands national team and was part of the first team when they finished fourth at the 1998 World Cup in France.

Ronald, like Frank, started his professional football career at Ajax and went on to make close to 250 league appearances for the Dutch giants in two separate spells. He also earned 67 international caps and scored 13 goals. He was named the best Dutch player in 1994 and 1996.

The duo from Ivory Coast are two of the most successful players from the African continent. Yaya Toure signed for Manchester City in 2010 and has gone on to establish himself as one of the best midfielders in the Premier League era. He was instrumental in helping the Citizens win the league title in 2012 and 2014 and also won two league titles and the 2009 Champions League with Barcelona.

Kolo won the league title with Arsenal in 2004 and has gone on to play for Manchester City as well as Liverpool. The brothers were hugely influential in helping Ivory Coast win the 2015 Africa Cup of Nations.