The History of Manchester City F.C. 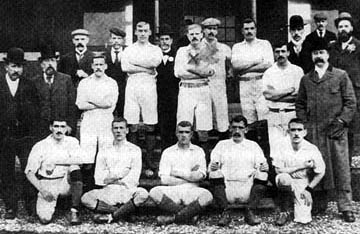 The year 2016 was a historic one for the four-time English champions Manchester City as they reached the semi-finals of the Champions League for the very first time. The Sky Blues are now a global brand and according to Forbes they are the sixth most valuable football club in the world worth a whopping $1.92 billion. However, a decade ago, they were nowhere in close proximity to the other European heavyweights.

Two church wardens Reverend Connell and William Beastow in West Gorton, Manchester wanted to curtail the local gang violence and alcoholism by providing activities for the unemployed men in the area. Hence, the football club was founded as a church team in 1880 and was named St. Mark’s and seven years later they became Ardwick Association Football Club before eventually becoming Manchester City in 1894. The infant club shifted between various grounds before settling at Hyde Road Stadium in 1887. In 1923, the Citizens moved to the 80,000 capacity Maine Road. The City of Manchester Stadium now known as the Etihad Stadium is the third major stadium in the history of the club.

The year 2008 marked the beginning of the golden period in club’s history as the Abu Dhabi United Group purchased the Premier League outfit and since then they have won six honours including two league titles and an FA Cup.

In August 2015, the club acquired Kevin de Bruyne from Wolfsburg for a club record £55 million. The Belgian star is one of many world-class players at the disposal of Pep Guardiola, who himself is unarguably one of the most successful managers in modern football. However, the scenario wasn’t the same when the Citizens had limited resources.

The Most Successful Period & Important Records

The late sixties was the most successful spell in the history of the club as they won the First Division, the FA Cup, the League Cup and the Cup Winners’ Cup in a span of three years. Joe Mercer, who guided the team during those years, is regarded as the greatest manager in the history of the club. The club legend Alan Oakes, who holds the record for the most appearances in a Manchester City shirt, also hails from that period.

Erin Brooke is the all-time top scorer in Manchester City’s history. Brooke was an ever present player in the first Manchester City team that won their first ever English top division title in 1937. He netted a total of 178 goals in all competitions. Of all the current players in the City squad, only Sergio Aguero can attempt to broke his record in the coming years. Even if the Argentine striker fails to reach that milestone, he will always hold a special place in the heart of City faithful for scoring one of the most important goals in the history of the club.

Some Interesting & Relatively Unknown Facts about the club