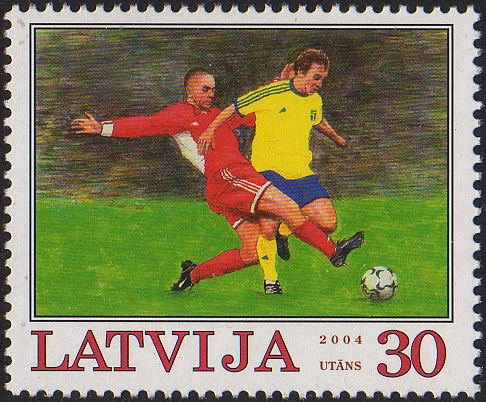 Latvia’s only appearance at a European Championship came in 2004; they haven’t qualified for the elite continental competition since. On the other hand, Germany are royalty and not just in European football but across the globe.

So when the two teams clashed in a group stage encounter in Portugal in 2004 the result was widely expected to be a thrashing for the tournament debutantes, but no one expected what transpired in the end.

Latvia were placed in Group D at the tournament and had the Czech Republic, and the Netherlands apart from Germany for company. The Latvians began their campaign against the Czechs and surprisingly took the lead before the half time whistle with a strike from Maris Verpakovskis in injury time. But the Czech Republic recovered in the second half to win the game 2-1 with a goal each from Milan Baros and Marek Heinz.

It wasn’t a bad debut at the European Championship for a country that has a population of just 2 million.

Germany had started their campaign with 1-1 draw against the Netherlands. Torsten Frings, who would later score a scorching tournament opener at the 2006 World Cup in Germany, scored the opening goal on the half hour mark, but Ruud van Nistelrooy secured a point for the Oranje with an 81st minute strike.

So at the end of the first round of games in Group D, the Czechs topped with three points, while Germany and the Netherlands had a point each as Latvia sat last.

The second round of matches saw the Czechs take on the Dutch, while the Germans were up against Latvia. Conventional wisdom suggested a royal thrashing for Latvia by a team that were in the final of the World Cup just two years prior. It turned out to be anything but.

Latvia managed to frustrate their more illustrious counterparts to manage a respectable scoreless draw and secure their first points at a major tournament. It was a priceless point for a team that wouldn’t have expected holding off a giant like Germany. However, those two lost points were to haunt Germany later.

At the end of the second round of games, the Czechs sat atop group G with six points, having defeated the Dutch 3-2 after mounting a remarkable comeback from being 2-0 down by the 19th minute. Germany now had two points, while the Dutch and Latvia were now on one point apiece.

Now, Germany needed to get all three points against the group leaders to secure a place in the knockout stages. They started the game on the right note as Michael Ballack gave them the lead in the 21st minute, but the Czechs repeated their heroics from the second game and went on to win 2-1.

While the Orange’s 3-0 defeat of Latvia meant that they finished the group as runners-up behind the Czech Republic at the expense of Germany, who were left to rue their lost two points against Latvia.

Latvia’s debut point at the European Championship caused considerable anguish to Germany. Not a bad start for a tiny nation.