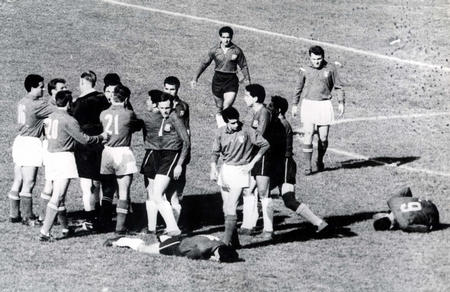 The 1962 World Cup match between Chile and Italy has gained notoriety for being one of the most violent and lawless football matches ever played. That entire competition was littered with disciplinary infractions, but what happened in the game between the hosts and the Italians took the indiscipline to a whole new level.

The stage for the ‘battle’ was set even before the World Cup began when two Italians journalists writing for newspapers La Nazione and Corrieredella Sera had some uncharitable things to say about the host nation.

“The phones don’t work, taxis are as rare as faithful husbands, a cable to Europe costs an arm and a leg and a letter takes five days to turn up.”

“Chile and its population are prone to malnutrition, illiteracy, alcoholism and poverty“.

“Entire Santiago neighbourhoods are given over to open prostitution”, were some of the uncharitable descriptions by the Italian scribes of the host nation, which was still reeling under the strongest earthquake ever recorded, one that struck Valdivia in 1960.

As the match began, the Chileans clearly seemed in the battle mode. The first foul was awarded after just 12 seconds and the first sending followed after a mere four minutes into the game. Giorgio Ferrini, the Italian who saw red, refused to leave the pitch and the police had to march him off the ground.

Leonel Sanchez, son of a professional boxer, landed a punch on Italian captain HumbertoMaschio, but got away with it. Perhaps emboldened by the referee’s leniency, he landed another blow on Mario David, who comically enough, was sent off for retaliating.

As if to add insult to the injury, Chile scored from the ensuing free-kick against the nine-man Italy and later added another late goal to clinch the match 2-0. However, with all that was transpiring on the pitch it was not hard to forget that it was actually a football match that was being played.

Amidst all the indiscipline, it was also a huge surprise that it were only the Italian players who bore the brunt of referee Ken Aston’s disciplinary proceedings as the Englishman showed no inclination to mete out the same punishments to the Chileans.

When the tape of the match eventually landed in England, David Coleman of the BBC introduced the match as such: “The game you are about to see is the most stupid, appalling, disgusting and disgraceful exhibition of football in the history of the game.

“This is the first time these countries have met; we hope it will be the last. The national motto of Chile reads, By Reason or By Force. Today, the Chileans weren’t prepared to be reasonable, the Italians only used force, and the result was a disaster for the World Cup.

“If the World Cup is going to survive in its present form something has got to be done about teams that play like this. Indeed, after seeing the film tonight, you at home may well think that teams that play in this manner ought to be expelled immediately from the competition.”

The match was rightly labelled “The battle of Santiago”, and it is great for the beautiful game that we do not see such lawlessness on the pitch anymore.