The greatest football game ever played 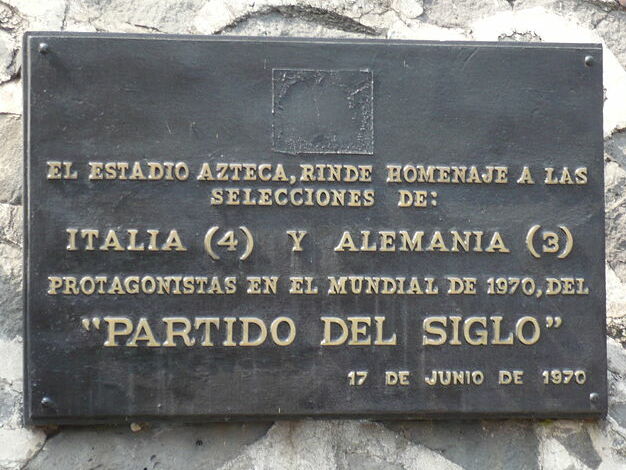 In Spanish the game is known as Partido del Siglo; the Italians call it Partita del Secolo, while the Germans have termed it Jahrhundertspiel. It all means the same “Game of the Century.”

It was the second semi-final of the 1970 World Cup, played at the historic Azteca Stadium in Mexico between Italy and West Germany and at the end of the sapping encounter that was decided only after extra time, the Italians triumphed 4-3 to book their place in summit clash against Brazil.

In front of 102,444 spectators, Italy took the lead in the eighth minute of the encounter through a Roberto Boninsegna strike. And the famed Italian defence that comprised of Enrico Albertosi in goal and the legendary Inter Milan duo of Tarcisio Burgnich and Giacinto Facchetti as well as Pierluigi Cera and Roberto Rosato in front of him, managed to keep West Germany at bay for the majority of the game.

That was until Karl-Heinz Schnellinger, who famously almost never scored, decided to score his only senior international goal when it mattered most. The scorer of the goal astounded everyone and was best encapsulated by the German commentator Ernst Huberty, who famously exclaimed: “Schnellinger, of all people!”. His strike that came in the added time extended the game into extra time.

And what followed is a stuff of legends.

The legendary Gerd Muller handed the initiative to West Germany with his 94th minute goal, but the resolute Italians equalised just four minutes later with an unlikely scorer of their own – Burgnich. Luigi Riva struck in the 104th minute to put Helmut Schon’s men back in front, but the game took another twist with Muller’s second strike just six minutes later.

At the World Cup, Italian manager Ferruccio Valcareggi was spoilt for choices at forward position with the presence of two of the greatest Italian forwards of their generation – Sandro Mazzola and Gianni Rivera at his disposal. His system didn’t allow two forwards to play at the same time so he reached a novel solution: play Mazzola in the first half and then substitute him in favour of Rivera in the second.

Valcareggi’s second half substitute came to the rescue of his team in the 111th minute to put the Italians 4-3 in front and that proved to be the final goal of an enthralling game.

Franz Beckenbauer famously played in a sling, having dislocated his shoulder in the second half. Schon had already made his two substitutions – only two were permitted at the time – by the time of the defender’s injury. It gave us one of the most iconic images of the man who would lead West Germany to glory just four years later.

The officials realised the stature of that game and installed a commemorative plaque at the historic stadium that reads: “The Azteca Stadium pays homage to the National Teams of Italy (4) and Germany (3), who starred in the 1970 FIFA World Cup, the “Game of the Century”. June 17th 1970.