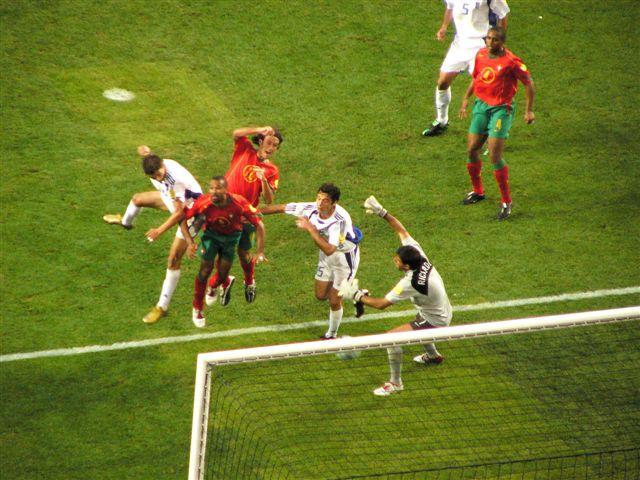 There are fewer stories of triumphs as unprecedented as Greece’s European Cup win in 2004. The Greeks started their Euro 2004 campaign against Portugal in the opening game of the tournament. Being the hosts, Portugal were the overwhelming favourites against a side that had only previously played at the biggest stage twice – first at the Euros 1980 and then at the 1994 World Cup in the United States of America. And they had failed to win a single game at both the events.

As a consequence, not much was expected from Otto Rehhagel’s men as they began their eventually successfully campaign in the summer of 2004 in Portugal.

Giorgos Karagounis gave the Greeks a surprise lead in the seventh minute of the game and the lead was doubled in the 51st minute as Angelos Basinas converted from the spot kick.

Rehhagel had devised a simple plan of making the most of set piece opportunities whenever they arrived and without the ball, his charges defended deep and with courage to keep the attacking moves of the opposition at bay. It worked to perfection on the opening day as they registered a 2-1 win to begin their campaign with three points.

The solitary goal for the hosts came from a young Cristinao Ronaldo, who came on as a second half substitute, as he struck in injury time.

Greece were next up against Spain. Incidentally, the two sides were in the same qualifying group and the Greeks had finished ahead of the Spaniards to seal their passage to the finals. In the game played at the Estadio de Bessa in Porto, Fernando Morientes put La Furia Roja ahead in the 28th minute, but Angelos Charisteas scored in the 66th minute to help his team secure a solitary point from the encounter. And it would prove invaluable in the larger context.

Russia were the final group opponents for the Greeks, but the game didn’t go according to Rehhagel’s plans as his side lost 2-1. However, four points proved enough for Greece to make it to the last eight, as they qualified ahead of Spain on the basis of their superior goals-for tally.

The Greeks faced then reigning European champions France in the quarter-final and against all expectations eliminated Les Bleus with the help of an Angelos Charisteas strike in the 65th minute of the game.

In the last four, at the Estadio do Dragao at Porto, Greece took on the Czech Republic. And it took a silver goal from Traianos Dellas in the 105th minute of the encounter to separate the two sides as Greece made the final of the tournament against all odds.

However, bigger glory was to still to come their way as another Charisteas goal in the final gave Greece their first ever major tournament victory.

Their triumph remains unprecedented in all of team sport and their unbelievable achievement will remain hard to emulate in the future.

It is a victory like theirs that we watch sports for – that excitement of the unknown and the possibility that anything can happen.