On his 50th birthday in 1997, Hendrik Johannes Cruijff said: “really, I haven’t lived fifty years, but one hundred.” At age 68, the former Ajax and Barcelona great has passed away after a long battle with cancer. Holland’s finest Cruyff will always be regarded as one of the best of all-time.

The legendary player and manager was one of the greatest ever football man to grace the football pitch. His footballing brain was second to none and because of his philosophy we have received many great gifts including the legendary Barcelona and Ajax teams. Cruyff was a visionary and inspired the greatest players of the modern generation. Here’s a compilation of quotes on Johan Cruyff from the most renowned personalities in the business. 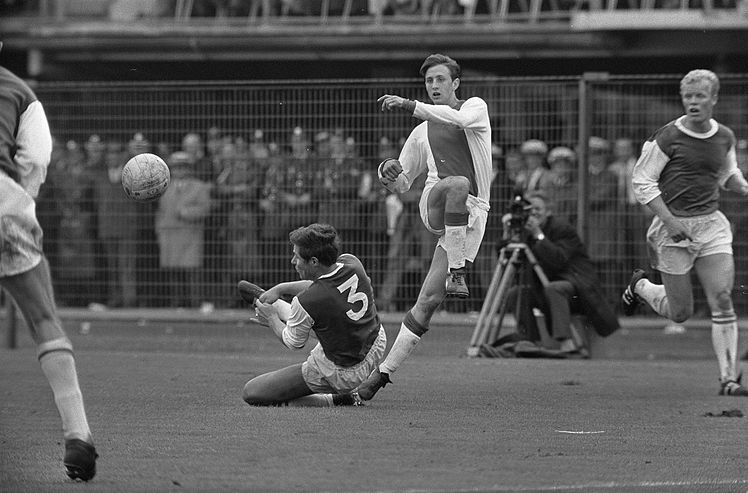 “He was certainly the best footballer Europe has produced.”

“He was so mature. He was such a skinny little kid but he had such immense stamina. He could run all over the field and he could do everything: set movements up, fly down the wing, run into the penalty area, head the ball in. Left foot, right foot, anything – and such speed.”

“As a player he turned football into an art form. Johan came along and revolutionised everything. The modern-day Barca started with him, he is the expression of our identity, he brought us a style of football we love.”

“Was he the greatest European player of all time? On form, it’s difficult to imagine who was better. It does not matter how and where you remember Johan playing, he was the best; in midfield he was the best; deep, the best; as an attacker, the best.”

“The ultimate space-measurer in Dutch football is of course, Johan Cruyff. He was only seventeen when he first played at Ajax, yet even then he delivered running commentaries on the use of space to the rest of the team, telling them where to run, where not to run. Players did what the tiny, skinny teenager told them to do because he was right. Cruyff didn’t talk about abstract space but about specific, detailed spatial relations on the field. Indeed, the most abiding image of him as a player is not of him scoring or running or tackling. It is of Cruyff pointing. ‘No, not there, back a little… forward two metres… four metres more to the left.’ He seemed like a conductor directing a symphony orchestra. It was as if Cruyff was helping his colleagues to realize an approximate rendering on the field to match the sublime vision in his mind of how the space ought to be ordered.”

“He was a great player at a time when Dutch football was going through a great period and deserves to be considered as one of the all-time greats.”

“A real football brain. He had superb control, he was inventive and he could perform magic with a ball to get himself out of trouble instinctively. He got a lot of goals, and although he was so skilful, he didn’t show off – he played to the strengths of the players around him.”

“One of the greatest players ever, a true giant in our game.”

“He was an absolute genius. He just played the game at his own pace, which I think at that level is fantastic.”

“Johan was innovative and a breath of fresh air. It was an extraordinary feeling, and he touched a lot of people.”

“Cruyff was the first player who understood that he was an artist, and the first who was able and willing to collectivise the art of sports.”

“Cruyff in his prime, especially in that World Cup (1974) was up there with the best of them.”

“Few have been able to exact, both physically and mentally, such mesmeric control on a match from one penalty area to another.”

“Johan Cruyff, Maradona, Pele, Eusebio, they were all fantastic players. But Johan was the greatest.”

“I think he’s one of those legends whose name is always going to be spoken about with the Peles and Maradonas. The rest of us, we’re just mortals, we come and we go.”

“I always told everyone that Cruyff was my idol. I’m not being disloyal to Madrid by saying that. You’d have to benarrow-minded and short on insight to think like that.”

“It is about creating one philosophy, one mentality, from the bottom of the club to the top. Cruyff is the one who started it all. He has been the club’s most influential figure. We all have the ability to do certain things, but I would not have been able to build something from scratch like Cruyff did. I learned a lot of things from him. I cannot imagine the current Barcelona without Cruyff’s work.”

“Under him, Barcelona were the best team in Europe and I think the game is still waiting for another team to achieve success playing the way we played. It’s no secret that he and I were often at loggerheads, but the fact is I owe him so much. He knows that I know what he did for my game. He was a great player himself and I can’t think of any other player who has been an influence on so many footballers down the years.”

“I played under great coaches like Guus Hiddink and Rinus Michels, but Cruyff shades it for me. An inspirational figure, he always wanted something more from his teams – for him, it wasn’t enough just to win; success had to be achieved in a manner that would be remembered and discussed for years. He was always a winner – a winning football player and a winning coach.”

“I think the person I learnt the most from as a coach was Cruyff because he was always talking about tactics – how to play, where to play and when to play. I think that helps a lot of young players, which is good. He was the most important trainer for me.”

“He must be one of the most creative coaches in football history, because I always loved his ideas and he was always talking about something new. I learned a lot from him and I feel happy and grateful that I had the chance to work with him at Barcelona.”

“He was a real visionary and you can see that nowadays, almost 15 years later, he’s still ahead of most of people in football. I’ve learned a lot with him.”

“It was an honour to play for Cruyff and I learned so much with him. He taught us that if you want to win you need to keep the ball for as long as possible. His methods for getting it back were special too and so was his vision of the game. A revolutionary who could get the very best out of you.”

“He has had the biggest influence on football out of anyone in the world, first as a player and then as a coach.”

“I loved the Dutch in the ’70s, they excited me and Cruyff was the best. [ . . . ] He was at the heart of a revolution with his football. Ajax changed football and he was the leader of it all. If he wanted he could be the best player in any position on the pitch.”

“He had it all – vision, attitude, presence. He was also very flexible, so when opponents tried to kick him he would always anticipate what was about to happen and move just in time. Defenders couldn’t touch him. He would be the provider for the main striker but was a prolific goalscorer himself too.”

“I played 18 years in top football and seventeen times for Sweden but that moment against Cruyff was the proudest moment of my career. I thought I’d win the ball for sure, but he tricked me. I was not humiliated. I had no chance. Cruyff was a genius.”