Last week Paris Saint Germain broke the French record for the longest unbeaten record. The Ligue 1 champions haven’t lost in 34 games but they are still way behind from becoming one of the most unbeatable league sides in Europe.

Now, Barcelona have beaten their previous club record of staying unbeaten for 28 games with a 1 – 1 draw against Valencia. 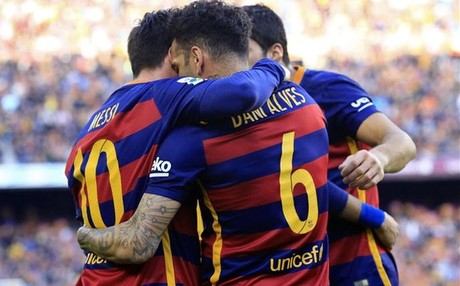 Barcelona had dismantled Valencia 7-0 in the first leg of their Copa del Rey semi-final clash at the Camp Nou to effectively seal their spot in the final of the domestic cup competition. The comprehensive win meant that manager Luis Enrique could rest almost his entire first team without the fear of going out from the competition.

And that is exactly what he did. Enrique fielded a team that mostly comprised of the reserve team members with only Ivan Rakitic being a regular starter from the first team. However, a good result would still see the team set a new record!

The Catalan outfit’s last league win over Levante over the weekend saw them tie the record of 28 successive unbeaten games under Pep Guardiola in 2011 and, if Barcelona could avoid a defeat against Gary Neville’s men, they would surpass the record.

And that is exactly what they did! Former Manchester City forward Alvaro Negredo had put Los Che ahead in the 39th minute, but second half Barcelona substitute Wilfrid Kaptoum scored with his first touch of the game to help the Blaugrana giants establish a new record for the most games unbeaten, with 29.

Although the draw brought to an end the sequence of ten successive wins across all competitions that began after the first match of 2016.

The 29-game unbeaten run has seen the side register some emphatic wins over their rivals, including a 6-1 shellacking of Roma in the Champions League, a comprehensive 4-0 defeat of Real Madrid at the Santiago Bernabeu of all places, a 3-0 win over River Plate that gave the club their third Club World Cup trophy, a 6-0 thrashing of Athletic Bilbao in La Liga, and of course the 7-0 hammering of Valencia which Neville described as one of his worst defeats.

The 1-1 draw has sealed Barcelona’s place in the final of the Copa del Rey, and they also comfortably sit atop the league table. On the European front, they will face Arsenal in the round of 16 of the Champions League, meaning the side remain in the hunt to win all three tournaments, just like they did last season.

Despite their outstanding achievement, both Barcelona and PSG are way behind the likes of Arsenal, Celtic, Milan and Steaua Bucharest. The Romanian club Steaua Bucharest lead the charts after staying unbeaten in 104 games from 1986 to 1989. Celtic (62) are second in the standings while AC Milan (58) are third. Benfica (56), Ajax (52), Arsenal (49), Nottingham Forest (42) and Chelsea are some other names that are still ahead of the two European powerhouses.