Spanish national team were quite abysmal at their last major tournament – the 2014 World Cup. The team lost their first two group stage fixtures – an astonishing 5-1 defeat to the Netherlands which was followed by a 2-0 loss against Chile – and despite winning their last game against Australia, the reigning European champions were unceremoniously booted out of the tournament that they had won only four years previously. 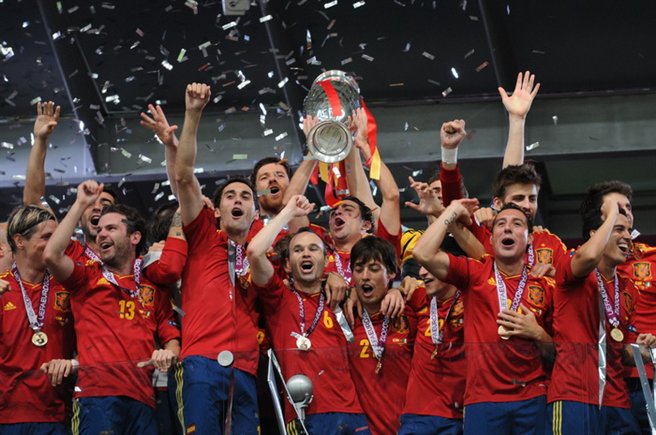 Manager Vicente del Bosque was widely criticised for his team selection as he opted to trust his old stalwarts in Xavi Hernandez, Xabi Alonso, Iker Casillas etc, despite the obvious signs that many of the 2010 World Cup winners and two-time European champions were over the hill and there was need for the infusion of fresh blood in the first team, especially with some superlative young talents at his disposal. Eventually, Xavi and Alonso retired from international duty after the World Cup and the midfield was revamped as a consequence. The team now look much better with the likes of David Silva, Andres Iniesta, Isco, Koke, Santi Cazorla and Sergio Busquets running the show.

The striker spots are being contested for by Diego Costa, Paco Alcacer, Nolito, Pedro Rodriguez and Alvaro Morata, who are all exceptionally gifted and are likely to be on the bus for France next summer.

The defence also looks solid with the likes of Gerard Pique and Sergio Ramos being the first choice centre-backs, Jordi Alba at left-back and Chelsea first team regular Cesar Azpilicueta at the right side of defence.

The only concern for the Spanish team would be in goal as Del Bosque continues to trust Casillas between the sticks ahead of Manchester United number 1 David de Gea or even Sevilla custodian Sergi Rico.

Spain are in a tough group at the Euros. Their group (Group D) contains the Czech Republic, Croatia and Turkey. All three teams are strong and Spain cannot afford to let their guard down as they attempt to create history by winning their third consecutive European championship. However, Spain will still be favourites to win their group and go far in the competition.