Most successful teams from each Confederation at the CWC

The Club World Cup is currently underway in Japan, where reigning Spanish and European champions Barcelona will face reigning Copa Libertadores champions River Plate for the title. The Catalans got the better of Asian champions Guangzhou Evergrande 3-0 in the semi-final courtesy of a hat-trick from Uruguay international Luis Suarez, while River Plate defeated Sanfrecce Hiroshima 1-0 to book their place in the summit clash.

Much before the tournament began, it was widely expected that the reigning European champions would be facing the Copa Libertadores winners for the title, such has been the domination of the two giant confederations of world football.

The erstwhile Intercontinental Cup was contested between the European champions and the South Americans since the tournament’s inception in 1960 until 2004. The Club World Cup in its current form came into existence in 2005.

The Intercontinental Cup was a fiercely contested affair and overall, a team from the CONMEBOL went on to win the trophy 22 times, whereas a team from the UEFA won it on 21 occasions. Six teams from the Argentine Primera Division teams won the prestigious trophy, making it the most successful nation in the competition’s history.

Since 2005, UEFA leads CONMEBOL seven wins to four. Barcelona are the leading team from UEFA, having won the Club World Cup twice – in 2009 and 2011. 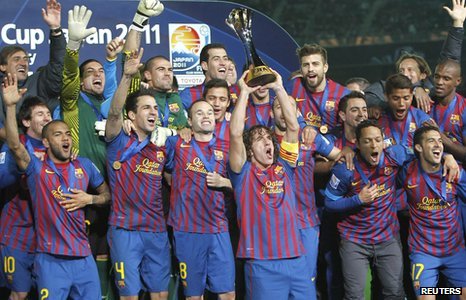 From CAF, two teams have reached the final, TP Mazembe and Raja Casablanca. Although neither side went on to win the title, their performance remains the best from a team from the CAF.

Among Asian outfits Japanese club Urawa Red Diamonds and Gamba Osaka, South Korean club Pohang Steelers and Qatari side Al Sadd have all claimed a bronze medal each, making them the best performing teams from the AFC.

Meanwhile, New Zealand side Auckland City have earned a third place and are the only OFC team to reach the semi-finals.