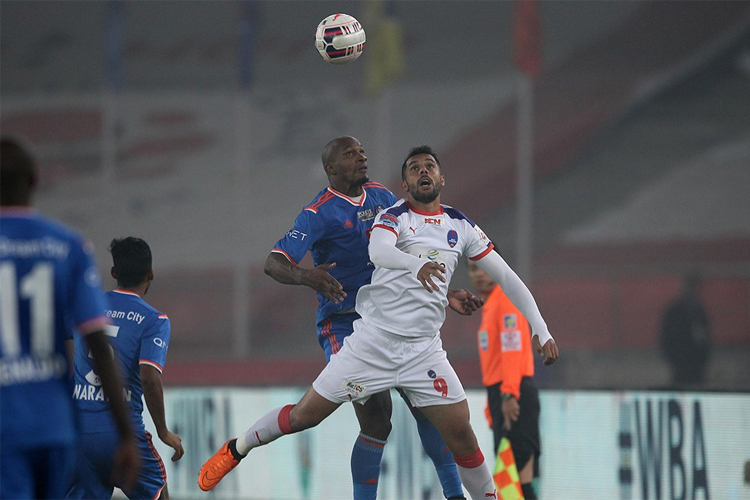 The first leg of the first semi-final between Delhi Dynamos and FC Goa ended in a 1-0 win for the hosts. Delhi looked the better of the two sides throughout the match and had multiple chances to score more than the solitary goal that they did, but their wastefulness in front of the goal has kept Goa in with a chance heading into the second leg at the Jawaharlal Nehru Stadium in Fatorda on 15th December.

The match started at a frantic pace as both teams attempted to get an early advantage in the fixture. The Delhi outfit launched a quick counter attack from a Goa free-kick, but former France international Florent Malouda shot over in the fifth minute of the encounter.

On the other end, Goa could have taken the lead through CS Sabeeth in the 12th minute, but the striker couldn’t hit the target from a Leo Moura cross. However, it were the hosts who took the lead three minutes from half-time when skipper Chicao delivered an exquisite cross that Robin Singh headed past the hapless Goa goalkeeper to give the advantage to the hosts. Delhi had the better chances in the second half as well to stretch their lead and make the return league an even more of an uphill battle for the Gaurs, but they were let down by profligacy in front of the goal.

Goa had beaten Delhi twice in the league stage of the competition, but lacked the same authority in the semi-final and will need to considerably up their game in the second leg if they are to seal their passage to the summit clash.

Delhi did well to keep the opposition forwards in check and Roberto Carlos will tell his men to play more of the same way in the second leg as well. The Lions’ lead is very small, meaning they cannot just rely on their defensive prowess to get a draw and reach the final. The narrow lead means, Delhi will be forced to attack in order to secure the match and thereby there will be openings for Goa to exploit.

It makes for a fascinating encounter in the second leg in Goa.